There is a good reason why I take a few weeks before writing about a long walk. If I wrote about it straight away I might write go into graphic detail about my physical outcomes of such an undertaking. No, best to wait a couple of weeks for blisters to go down and for my legs not to ache anymore! You see, I wouldn’t want a few blisters (possibly caused by incorrect footwear choice) to detract from a wonderful walk and, when looking back on it, a very worthwhile experience.

The Wherryman’s Way walking route runs from Norwich to Great Yarmouth, which for the majority of the walk, follows the River Yare, through open marshes, reedbeds, meadows and through riverside villages. The walk takes its name from the wherry, which was a large cargo-carrying barge whose elegant black sails were once a common sight on these waters. The full walk is approximately 35miles, so it is certainly not a walk for the faint-hearted. Of course, with any decent walk, a degree of planning is required.  A walk of 20-odd miles is achievable in a day, but 35 is probably too much and would need to be split over a couple of days, or more leisurely over three days. So, you would then need to plan accommodation and transportation, and, well, life justs get in the way of a 2-3 day walk anyway (though we did walk along part of the Peddars Way over a couple of days a few years ago.) And that’s kind of why we decided to walk from Great Yarmouth to Reedham Ferry and then back to Yarmouth. This made our walk about 22 miles, a comfortable walk in a day. 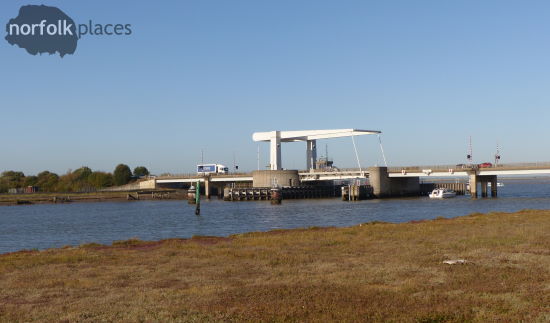 On a sunny late September morning, we took an early train from Norwich along the Wherry Line through the expansive Norfolk countryside. As the train rumbled past grazing fields I could see why people have the impression that Norfolk is flat. On arrival in Yarmouth, other members of our walking group joined us outside the station and collectively we strode off towards and under the Breydon Bridge. A stiff breeze had greeted us at the start of the walk, and as grew alot stronger as we headed out alongside Breydon Water and Berney Marshes. I would say the constant strong breeze made the walk a lot harder than it is. The dry weather had also meant the pathway was cracking and made it difficult underfoot. 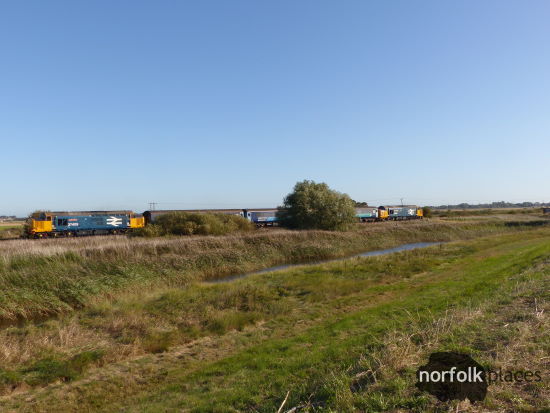 The Wherry Line runs through it. I can’t help stopping to take a picture of the trains. Yes, it would be cooler if it was a steamer, but these traditional British Rail style blue and yellow diesels are quite neat too. 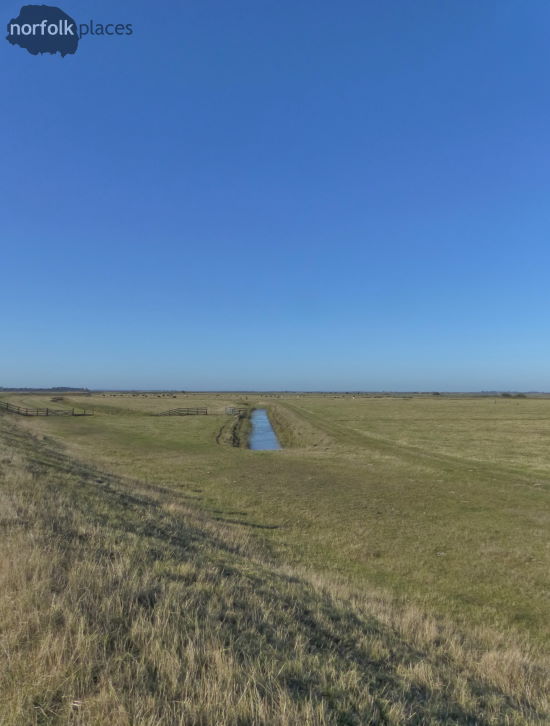 Alongside Breydon Waters there is an elevated bank, which I was walking along when taking this picture. The bank, which is a couple of metres above sea level, stops the River Yare turning the marshes and fields into an inland sea. I commented to my fellow walkers that with climate change the bank will need to be higher and longer soon. 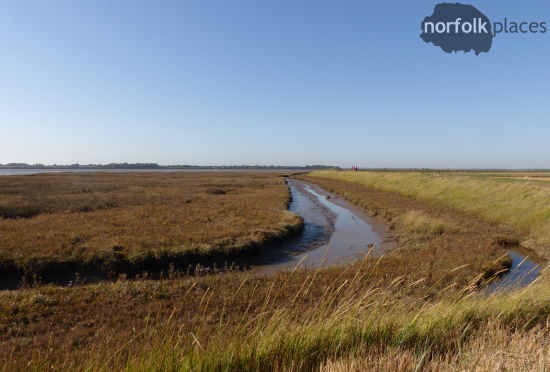 Hardly a soul to be seen. The persons on the horizon were part of my walking group. Apart from our party, I only saw 2 walkers, 1 cyclist, 1 jogger, and a dog-walker between Yarmouth and reaching Reedham village. 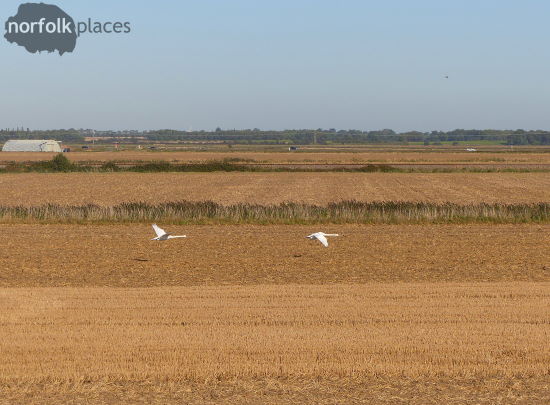 Not one but two swans in flight. The sound of the wind and the call of birds were prominent. The A47 in the distance could hardly be heard at all. 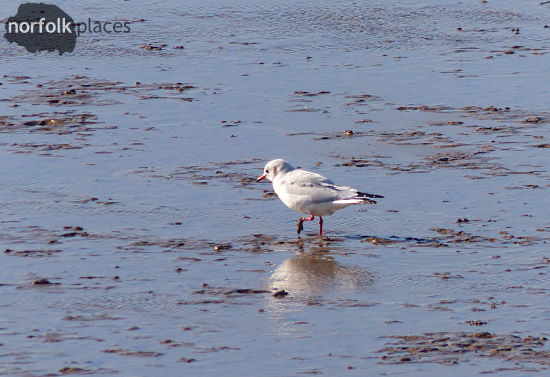 Someone wading and hunting for a tasty snack. Sea birds hovered, glided and swooped down on Breydon Water, taking advantage of the retreated sea to find easy pickings. 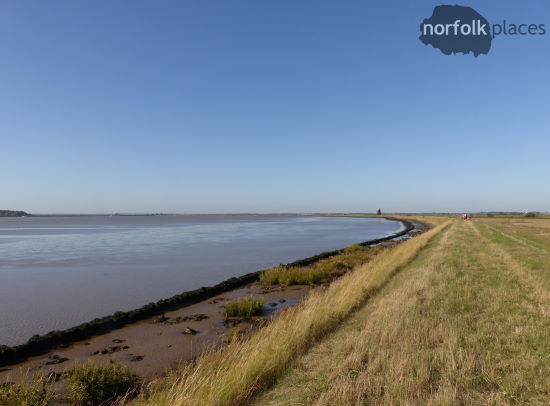 Expansive is a word I’ve used already, but it kind of fits. You could see for miles across unchanging landscape. The scenery changes snuck up so subtly; The bank would drop unnoticed, a bend in the edge of the water, marshes become reed beds, distant windmills seem forever distant until the path twists and you’re there. 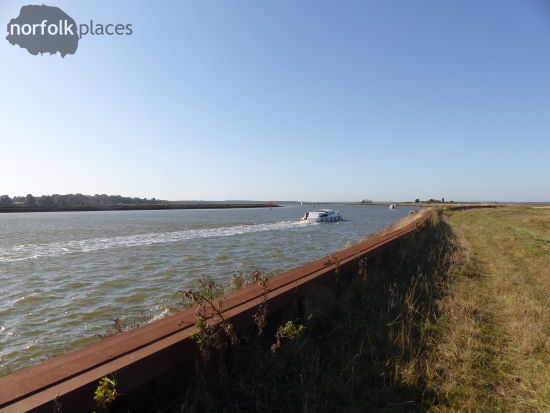 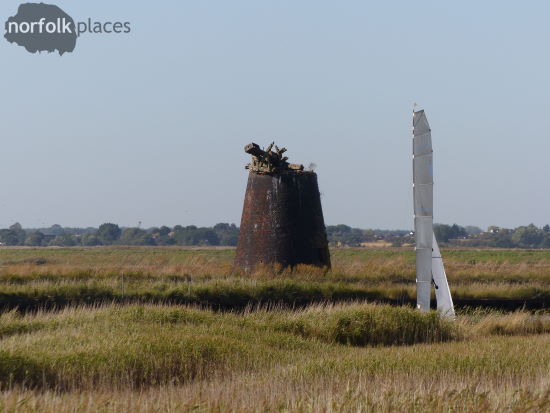 A boats sail visible above the reeds as it passes the derelict remains of Limpenhoe Drainage Mill. 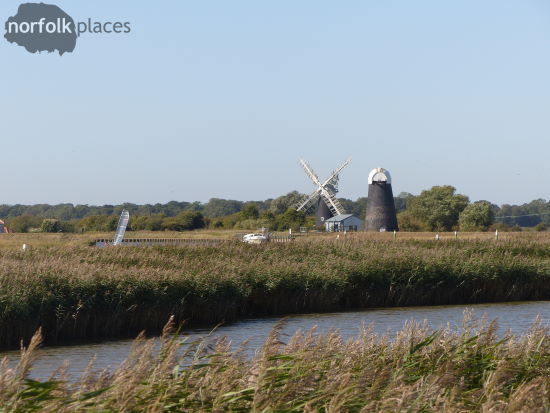 Let’s face it, old mills are great, and make fantastic photographic subjects too. Here there are two close by. Again across the reeds juts up over the reeds, and a motorboat cruiser is moored nearby. 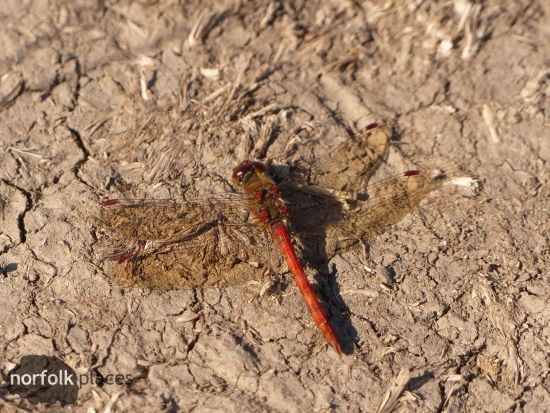 After initially evading my photographic attention, this Red Veined Darter Dragonfly suddenly determined it wanted to be photographed. As it darted and settled amongst the reeds I attempted to capture it on camera several times. Other damsels and dragonflies had likewise evaded my lens on this walk. After several minutes of passively attempting to capture the shot, I switched my camera off only for the little fella to dart in front of me and settle on the dry mud path. I approached cautiously, suspecting it will dart off once more, but to my amazement, it stayed put. In fact, having taken my photo I had to step around it and it stayed for a few more seconds before flying off once more. 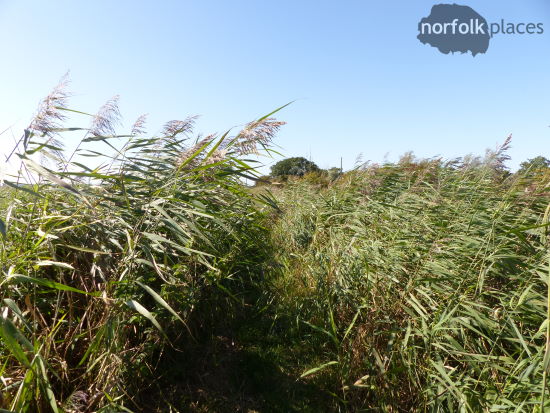 There’s a path through here somewhere! It’s easy to imagine you’re a jungle explorer at this stage of the walk. But I didn’t. My feet were starting to feel sore and I was hungry! On the plus side, it meant for once we were out of the wind. 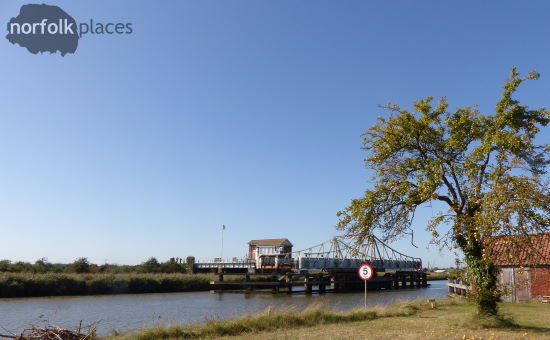 This swing bridge at Reedham allows boats to travel along the River Yare. It’s a dual line bridge and has been in place since 1905, replacing a previous single line swing bridge which was built in 1847. The feat of architecture is fantastic. There is a picture of the bridge swung in favour of trains on our Instagram page. 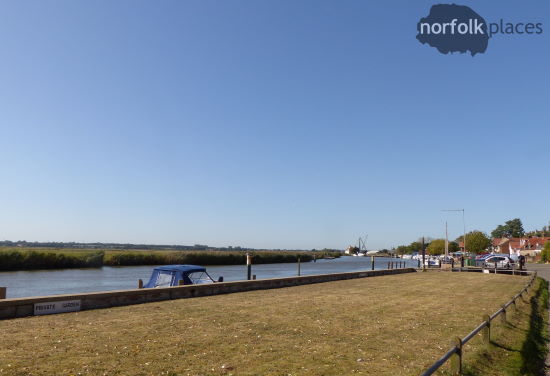 Reaching Reedham was a relief because we knew a pub lunch wasn’t far away. Of course, we had to walk past two more pubs at this point; I don’t mind admitting a mini-pub-crawl entered my mind! A few people at the quay, but this idyllic village was still very tranquil. A few of us walkers pictured retiring here in years to come!

As we trudged along the road from Reedham to Reedham Ferry it seemed, like a lot of the walk so far, that our destination was some distance away. Fields on either side, civilisation behind us or seemingly miles away across a cow-occupied field (turns out it was the British Sugar plant at Cantley). But once again, it snuck up on us, and a bend in the road revealed the Reedham Ferry Inn and more importantly, the half-way point in our walk. Oh boy, seeing the chain ferry was a welcome sight! 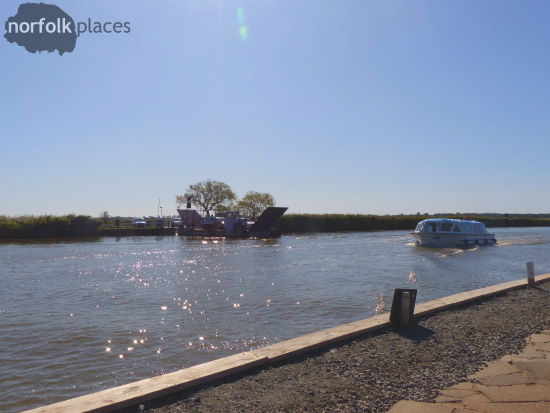 On previous walks I have checked out my blisters, do some running repairs and carry on. This time, I decided to leave them alone. I’m not sure if it was wise or not, but it gave me time to enjoy my lunch (fizzy drink and a sausage sarnie and chips-  yum!) before commenced the return leg.

From this point on I didn’t take any more pictures. The second half was made easier by knowing where we were going, but the landscape being what it is, it is harder to figure out where you are and how far you have to go. In a way I wish I had noted how far each mill or other notable feature was along the route, and yet, knowing how far you have to go doesn’t always help either. As we ploughed on (at this point I should note we were still doing a decent 3 miles an hour in strong windy conditions) my feet started to hurt more and more, and my quads were on fire. I dare say going at a slower pace would’ve made it easier and more enjoyable, but, and here’s the thing, we were walking with a mission and a rough plan. Leave Great Yarmouth station at 9am, get to Reedham Ferry for lunch, then get to the seafront for a few pints by 5pm. And it was for charity too. So, although each step was painful, I had to do it. I wanted to do it. I needed to do it.  And I did do it.

Strangely, as I look back on this challenging walk, I don’t think there was much breeze at the seaside, which was a picture of postcard calmness as the sun started to descend, shimmering on the sea and adding a deeper richness to golden sands. And a golden pint or two felt like a just reward for nearly 9 hours of exertion. The only thing is, having sat down I struggled to get back up again!

This is a fantastic walk, but not to be taken lightly. Preparation is key; Wearing good footwear, taking breaks, working out where you can go to the loo (there’s a public toilet in Reedham, not many sheltered spots for the call of nature on route!), carrying sufficient drink, knowing your own ability to walk certain distances at a certain pace. It’s also fair to note that along this route there are not many places to pick people up, so if you get injured then it’s not very accessible. There is a train station at the Berney Arms, and again a Reedham (where you can also get to by car) but that is about it.

It can be a desolate, lonely, wind-swept slice of nature, but wow it is a stunning place to walk, and a great place to enjoy in Norfolk’s stunning landscape. I for one would do it again, though at a more leisurely pace nex time. And the rest of the Wherryman’s Way? Just watch this space!