Norfolk is a food connoisseurs paradise, and we at NorfolkPlaces like good food! When we discovered that the Little Pink Kitchen‘s Tracy Macheta shared our passion for food we invited Tracy to explore and share here thoughts on Norfolk’s bounty. Tracy’s latest article see her visit the West Norfolk town of Hunstanton, known to many as “Sunny Hunny”, to peruse The Norfolk Deli.

When I was recently asked to write about a local business or product for NorfolkPlaces, I thought it would be a good opportunity to visit Hunstanton and finally get to meet Mark and Rosie, the husband and wife team who own and run The Norfolk Deli. I’ve been following their Facebook page and Twitter feed for quite a while and I’ve been impressed with the glorious photographs of all the edible goodies – many made in store – they regularly post.

When I walked into the Deli, the vast array of products immediately caught my eye: jars, bottles and packets of all shapes and sizes not to mention fresh bread, cakes and chocolate. At the far end of the shop was a counter brimming with a huge assortment of cheese as well as sausage rolls, pork pies, cold meats and mini quiches. In fact, there was so much food I was beside myself. The Deli is a foodie heaven reminiscent of traditional delicatessens you find in France or Italy.

I then discovered the Deli also had a downstairs where there was a wine cellar, more food products, the “Gift Hamper Station” and four tables where people could eat the sandwiches or salads they’d purchased upstairs.

After my whistle-stop tour, I sat down with Mark and asked how he and Rosie came to own the Deli. Mark said he had previously worked in the IT industry for 30 years and Rosie had been an actress and a midwife (amongst other things). Rosie had grown up with parents who had run a B&B and owned a café and Mark said that they both grew up in families where food was appreciated. The idea of doing something food-related had been in Mark’s mind for a good ten years but it was only when their three children had left home that the couple felt the time was right. 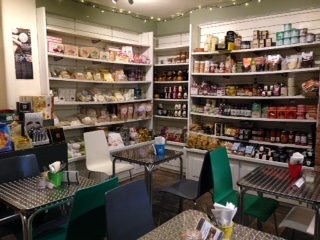 Mark and Rosie considered setting up a B&B or running a pub but once they’d been to Hunstanton in 2013 and viewed the Deli premises, they felt that it was the ideal business for them to take over and build on. They opened their doors in January 2014 and are open seven days a week.

I was astonished to learn that they do everything themselves from working in the shop, updating the website, making cakes, inventive salads and other food items, making up gift hampers, mail order as well as more recently producing ready meals and undertaking outside catering.

Their hard work has paid off as the Norfolk Deli has won several awards including most recently the “Muddy Stilettos” 2016 award for “Best Deli” and the 2015 “Norfolk Food & Drink Award” for “Best Independent Retailer”. Other recognition includes being a finalist in the 2016 national “Farm Shop and Deli Awards” and being a finalist in two categories in the “Kings Lynn Mayor’s Business Awards” namely “Business Person of the Year” and “Independent Retailer”.

One event that Mark attended in September this year as a finalist was the “Café Life Awards” where he had entered the “New York Bagel Challenge”. Mark described this occasion as “a fashion show for sandwiches” although it is in fact a trade show for the fast food industry. With well-known national companies such as Pret a Manger, Subway and Marks & Spencer taking part in this event every year, it was testament to Mark and Rosie’s increasing reputation – despite being a comparatively young business – that one of their recipes made the finals.

Mark and Rosie believe that being a good retailer is not just about having an “open” sign on the door. I’d say that the Norfolk Deli isn’t simply a shop: it’s a place where you can try and buy a wide range of locally produced items, you can buy a sandwich and eat in or take it away, you can order a gift hamper that will be delivered free of charge, you can browse the wine cellar and purchase made-on-the-premises bread, cakes and other treats. There is a selection of over 60 cheeses, over 30 cold meats / hams and at least a dozen types of olives and antipasti. You can even order a wedding cake made of cheese!

Mark and Rosie’s recent move into outside catering means they are able to provide food and drink for business meetings, product launches, parties or private events and they also have an online “click and collect” service for takeaways.

When you’re next in North West Norfolk, I’d highly recommend a visit to The Norfolk Deli in “Sunny Hunny” but if you can’t get there, have a look at their stylish interactive website which Mark designed and keeps constantly updated. 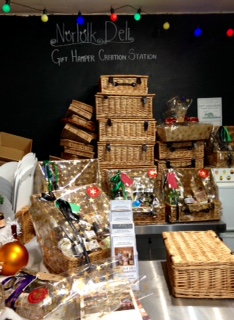 Find Great Products Made in Norfolk