Tis almost the season of festive overindulgence. I break out in a nervous sweat at the mere thought of this spend-fest, though I’ll admit to drooling whilst contemplating Christmas dinner! Every year I promise myself I’ll eat less, drink less, spend less, argue less, care more, and paradoxically, care less.

Sadly, as my kids got older there is one thing I am doing less of; Reading Christmas Stories to them during the run-up to the big day. This year even my youngest son will be too old for this tradition. In order to compensate for this denial of my parental passage, I have a little tale of my own to tell you good folk instead.

Wisps of snow tumbled in the chilly air. A vast white landscape as far as the eye could see, fresh and pure, save for a scattering of fading reindeer tracks.

Candlelight and a warming hearth illuminate a homely cottage like a beacon in a storm. Inside the cottage, an elderly couple warm themselves by the fire.

“Oh dear, oh dear,” muttered Father Christmas, waving a hefty list above his head. “Look at all these plastic toys for all the girls and boys.”

“They’re not so bad, Mr C”, Mrs Christmas assured him. “I think the kids will like them.”

“Piff. That’s just what that young elf Nestori said! Just because he is only 300 years-old he thinks he’s ‘down with the kids’, whatever that means.”

“Well, that’s the 21st Century for you dear.  Everything is fast and disposable.”

Father Christmas stood up and tossed the list on a table with a thud.

“The worst thing is a lot of this stuff won’t be played with much and will get left in drawer, and sometimes they are so cheap they’ll break in seconds and end up in the bin.

“Why can’t we go back to the good old days of wooden toys made by my army of elves? Pah!” he waved both hands to express his disgust. “The parents of this generation have all grown up with plastic consumption. They’ll never change back now.”

There was something in her husband’s words that made Mrs Christmas’ eyes lit up, an embryonic idea growing in her artful mind.

“What?!” uttered a bemused Father Christmas.

“Children don’t normally ask for what’s in their stockings.  That’s down to you!”

“Ho! Ho! Ho! Brilliant! I can bring back lumps of coal! No, wait,” he tugged at his white beard thoughtfully. “Coal was for the naughty ones, wasn’t it? And it’s not great for the environment either. All the soot made my suit dirty too,” said Father Christmas.

Mrs Christmas studied her husband as he brushed pretend soot off his jacket sleeves.

“I’ll send Nestori to one of his watches, and get him to leave some ideas for stocking fillers that aren’t plastic junk.”

An excited Father Christmas jiggled his round belly and set off to find Nestori, the young whipper-snapper elf, and explain his mission to turn the tide on plastic tat.

One balmy August evening I was sitting in my garden, sipping from a chilled beer bottle and admiring the bees as they darted from plant to plant. The sound of my sons playing on the Xbox drifted from an open window.

As I placed the hoppy beverage down on the table, I noticed a letter in hand-writing I had seen only a couple of times before. It belonged to an elf called Nestori, who wrote to my boys a couple of years ago because their football goal was going to be late.

This time he wrote to me with some suggestions for reduced plastic and lower waste Christmas stocking fillers. It was Nestori’s plan for me to share these ideas with a wider audience. Elf help rules mean I can’t replicate the letter word for word. Besides, elf handwriting is atrocious!

Don’t worry, there’s no chance my kids will read this list unless it appears on YouTube or TikTok! I hope this will help inspire you to stock up with greener fillings that bring some festive joy.

Sock It To Them!

This first one isn’t on Nestori’s list and is more of a personal suggestion. When I was a kid we didn’t have shop-bought stockings to hang by the fire. Instead, we made do with one of my Dad’s old football socks. So, before you buy glittery festive hosiery, consider re-purposing an old sturdy sock. Just give it a wash first! 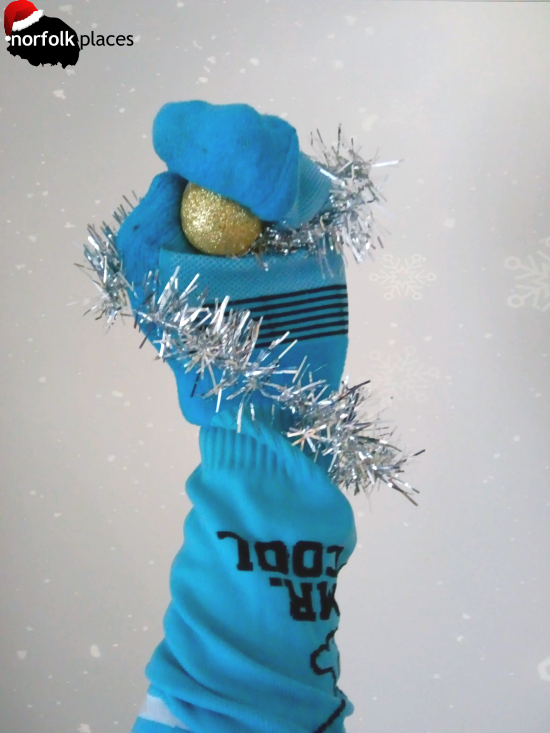 At Christmas, the UK uses over 90 million metres of wrapping paper. Nestori says we can reduce this by switching to reusable solutions. For example, in Japan gifts are traditionally wrapped in cloth fabric, which would be a great way to save on paper and tape year after year. Cloth production may have a higher initial environmental footprint than paper, but as long as you use many times over the years it will be beneficial. You could also make use of old postal packaging, toilet rolls or small boxes. For larger gifts you could cover a shoe box in gift wrap, which could be reused for a few years. 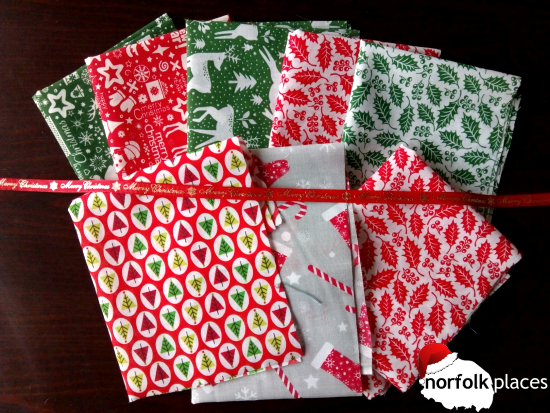 We’re not quite in Tracy Island territory, but this one is straight out of the Blue Peter playbook. Kids like to make things, so encourage their creative minds by putting together a model-making kit. Objects that would be ideal include old buttons, pens, camera film tubes, cardboard tubes, bottle tops, and elastic bands. A quick search of the internet should unearth a list of materials needed for your child to assemble their homemade toy. Did you like this idea? Let us know about your assembly kit in the comments below.

What’s round, shiny and still useful? Money! Bundle a bit of coined currency together and you’re on to a winner straight away. It doesn’t have to be sterling either. Foreign coins and old coins could add a bit of interest and may spark a coin-collecting hobby.
Vouch For It

On the monetary theme, gift vouchers are popular gifts for children of all ages. You could buy online and print the voucher code rather than getting a single-use plastic card from the shops.  The range of vouchers is varied, though I’m pretty sure my kids will only want Xbox vouchers to buy games online anyway, which saves on plastic packaging. 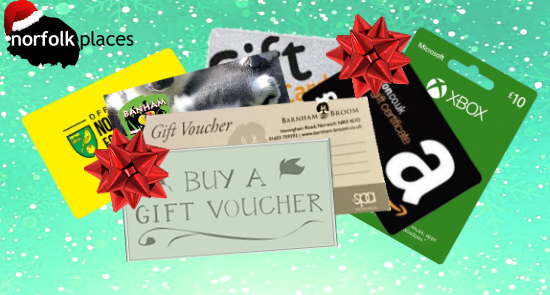 Get On Board The “Ship”

Generation Z has a high environmental consciousness, and as green parents we should encourage this. A younger version of me sponsored an orca for many years, and I’m pretty sure my kids would appreciate an animal or environmental project sponsorship or membership filling up their stocking.

My kids often sing random songs that aren’t familiar to me. I’m not entirely sure where they hear them in the first place, but Nestori has come up with the goods by suggesting a music subscription service. For presentation purposes, I might make a certificate and roll it up like a scroll. An alternative suggestion would be a magazine subscription.

No, I don’t mean record a video of yourself doing a 30-minute stand-up routine for your kids’ amusement! Of course, if you want to, then go ahead. However, I’m referring to comic-books, such as The Beano, X-men, Asterix etc. Comics can encourage reading, and on Christmas morning they might keep the kids quiet for 30 minutes too! Even better, they don’t cost much, and you can “reuse” by buying pre-owned comics from your local comic book store. Roll them up, pop a rubber band and slide it in the stocking. Voila!

Chocolates and sweets appear in most stockings; however, many are in plastic packets. Instead, why not look out for bars that come wrapped in a paper outer layer and a foil inner layer, which can be more readily recycled. Of course, some chocolate coins fit the bill too. However, packs of chocolate coins come in a plastic mesh bag. An alternative would be buying a large individual chocolate coin. Check out local choclatiers to see if they have environmentally friendlier packaging. This way you support the local economy and this can further reduce environmental impact of your purchase. 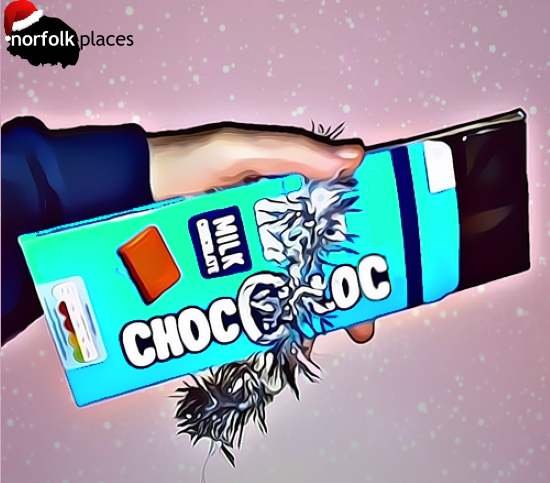 Whenever I’m doing a spot of tidying, I occasionally find something cherished that was handed down to me or items I kept for sentimental reasons; Cuff-links, old watches, flat caps, small ornaments, photographic slides, postcards from long-past relatives. They’re special to me, and with an explanatory note they may mean something to my kids too.

I think Nestori has been going through my drawers, which is probably a good idea because they are full of things that I’m reluctant to throw away. There is an assortment of fast-food/cereal toys, Christmas cracker prizes, knickknacks, mystery keys and fobs, a yo-yo, several novelty pens and, well, the list goes on.  Rather than bin these items, there is some logic in re-purposing these as stocking fillers.

Although he’s one of the younger elves, Nestori makes the older style wooden toys that were enjoyed by many generations. Go to any antique store and you’ll see much-loved toys made out of wood, such as hopping kangaroos, vehicles, animals, puzzles and jigsaws. You could ask Nestori to make one as a stocking filler, or if you’re a bit handy with your tools, making your own will feel more special. Did you like this idea? Let us know what you made in the comments below.

That cheeky little elf wrote “memories” and left me to interpret the meaning, so here are my thoughts on this. Find an old data-stick and fill it with family photos, print some childhood memories and create an album, or plan a family/experience day. My PC has thousands of family pictures so it makes sense to try to and pass them on to the kids. Sifting through them might take some time…

Year after year the same item appeared at the bottom of my Christmas stocking; A nice juicy satsuma! In those days, satsumas were not quite so commonplace as they are now, and there is the carbon footprint consideration of imported food. That aside, as a parent, I am looking forward to the reaction when they discover a nice juicy satsuma or clementine for them to enjoy on Christmas morning! 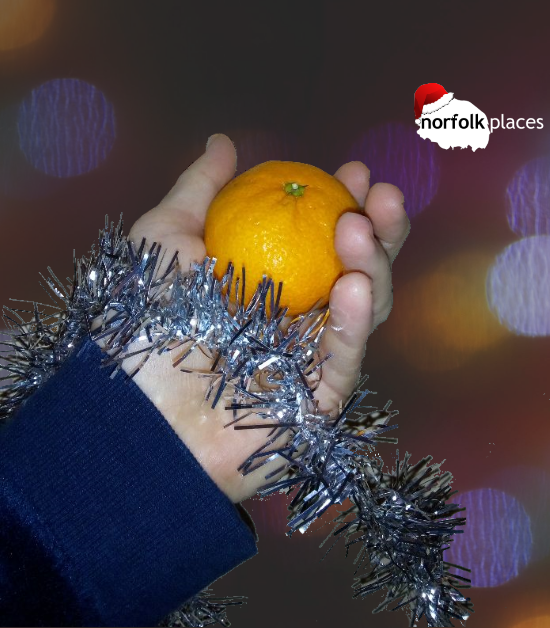 Nestori’s final suggestion is a nice touch, which I think older generations would appreciate. We’ve lost the art of writing and kids and thank you cards is a great way to encourage them. Shop-bought cards are an option, especially ones made from recycled materials, but if you’re a bit creative you could make your own. Scan it and email it to the recipient to reduce the carbon footprint of using the postal system.

If you heard a jingling of bells whilst reading these suggestions then take it as a sign. A sign that you need your hearing tested! Hopefully, these ideas will inspire you to fill Christmas stockings with less plastic and lower waste gifts. There were a few more ideas on Nestori’s list but my memory is so foggy I would need Rudolph to help me find them! One thing is for sure, we’re going to need a bigger pair of socks!

Need more ideas? Why not find out more about Christmas in Norfolk or browse NorfolkPlaces for Things To See & Do as somewhere to take the kids for a Christmas treat!