Aladdin is one of the classic panto tales and it boasts plenty of exotic twists, with the story originating in the Middle East but being mostly set in ancient China.

Appropriately then, this production at the Marina Theatre Lowestoft has a wonderfully international character, with backdrops ranging from old Peking through to Egypt.

Despite its historical setting, there is nothing fusty or old-fashioned about this production: the show is fast-paced, fun and obviously a big hit with audiences.

Former MP Ann Widdecombe is suitably imperious and withering as the Empress of China, the 71-year-old entering into the spirit of things with gusto as she tries to keep her daughter away from the clutches of the smitten Aladdin, played well by the singer and actor Mark Read.

Indeed, the singing of Aladdin and the other vocalists is a real highlight of a show that offers a huge variety of tracks. They range from the delightfully silly Musical Academy of Bungay through to a couple of more poignant numbers and even a bit of boyband fare, with Read referencing his days in the group A1 by singing their version of A-ha’s Take on Me, all the while flying across the world on a magic carpet. There’s also Kung Fu Fighting, a Bee Gees medley and lots more. The musical accompaniment from the live band matches the excellence of the singing.

This is, of course, much more than a musical, however. Marina Theatre regular Terry Gleed has the audience laughing throughout as the hapless Wishee Washee, while Fenton Gray is also a crowd-pleaser as Widow Twankey, who showcases the show’s most over-the-top costumes. Mia Richards, as Aladdin’s love interest, and Darren Clewlow-Smith, playing the energetic baddy Abanazar, are also great in their roles.

In keeping with Widdecombe’s parliamentary background, there are many topical political references, with mentions of present-day villains or heroes (depending upon your political persuasion) such as Donald Trump, Jeremy Corbyn, Diane Abbott and Jean-Claude Juncker, while Brexit – inevitably – is thrown in for good measure. Widdecombe’s memorable “something of the night” quote is also woven into the script.

The tension and action builds to the inevitable happy ending.

So, exotic backdrops, amazing costumes, great songs, lots of gags, and excellent performances from a varied and good-natured cast – Aladdin has all the elements of a top-class panto. 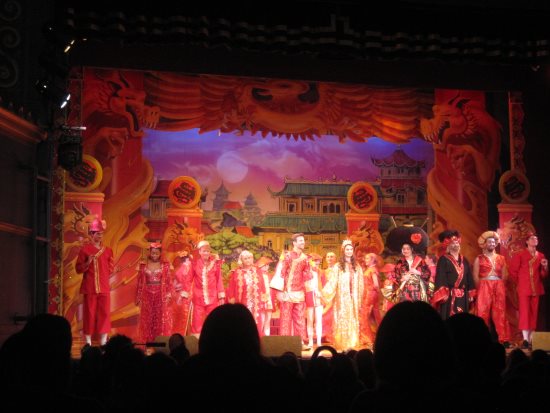