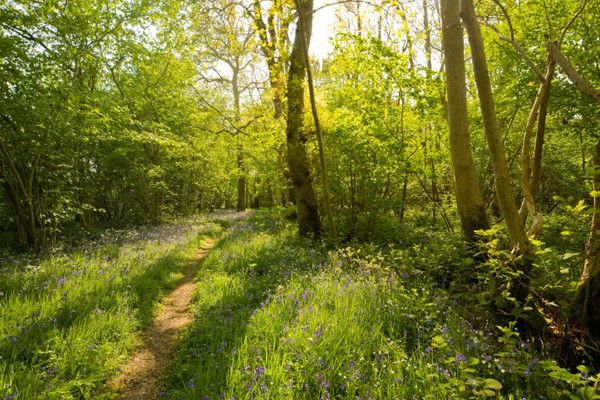 In early spring pale yellow primroses peek out from the banks of ditches, a prelude to the riot of colour to follow in mid/late April to early May (varying year to year), when bluebells carpet the woodland floor. Other interesting woodland plants and wildflowers such as dog’s mercury, greater butterfly orchid, wood anemone, wild garlic and herbparis can also be found, as well as the locally scarce wild service-tree. In total over 350 flowering plant species have been recorded.

All of the common woodland birds can be seen with patience in Foxley including green and great spotted woodpeckers, nuthatch, treecreeper, marsh tit and jay. Common summer visitors such as blackcap, garden warbler, chiffchaff, and willow warbler occur, and declining species such as turtle dove, grasshopper warbler, and spotted flycatcher may also sometimes show themselves.

Tawny owls are resident, and barn owls occasionally hunt along the wood’s wide rides. Birds of prey include sparrowhawk and kestrel, with rarer visitors including hobby and common buzzard.

Sorry, no records were found. Please adjust your search criteria and try again.