The NorfolkPlaces Playlist of Christmas Tunes – A Great Way To Get The Party Started!

Ok, so this a complete departure from the norm. It’s not about going out for family day trips or any of the other stuff we cover. It’s not about Norfolk at all. But it is the season to be jolly, so we decided to put together a playlist on YouTube of some of our favourite Christmas tunes we play in the office and we wanted to should share it with you.

This isn’t definitive and there are is other stuff we listen to that is not on the playlist. For example, not all of Ladbaby‘s seasonal winners have made the playlist because they don’t really mention Christmas (we added one of them, We Built This City on Sausage Rolls, to mix things up a little). Also, there are some versions of songs that are cover songs. They just happen to be the versions of songs we prefer, though the original versions do get played too..

Our playlist is a mixture of traditional, pop, rock and small slices of cheese. And movies; Yes, as we compiled this it became quite clear that a quite a few of our favourite Christmas tunes were also used in movies. We hope you enjoyed our selection. It may well grow bigger over the next few years but it’s a decent first effort. We would like to point out that the videos were uploaded by 3rd parties, so we have no control over the content or any advertising that appears on the videos etc.

Below the playlist video you’ll find a bit of waffle about some of the songs are on the list. It’s not necessarily in the order of the videos on the play list.

From the moment I first heard Christmas (Baby Please Come Home) building up on Rockin’ Ricky Rialto’s radio show (on the Gremlins movie) I knew I was listening to something special. Darlene Love‘s festive track is one of my absolute favourite songs of all time and I hit the repeat button every time it comes on. It’s a good job the rest of the office agrees! All Alone for Christmas is from Home Alone 2, and again shows what a great singer Darlene is.

If I say “Johnny Mathis” to you chances are you’ll think of When a Child is Born as this article is about Christmas tunes. You would be right and wrong all at the same time. You see, whilst that’s an awesome song my favourite Johnny Mathis tune is Do you Hear What I Hear?  Okay, so, that’s two songs that featured on Gremlins already;  It’s been a while since I watched it so it is possible some of the other tracks selected were on it too!

Elf’s Lament (featuring Michael Bublé) is a wonderfully original slant on the seasonal tune by the Canadian band Barenaked Ladies (BNL), and I just love their version of Jingle Bells (and it was an excuse to fun show a decorative light show video!). Jim Carrey movie fans may notice BNL had a track called Green Christmas in How The Grinch Stole Christmas. Ok, we’ve included a version of that track too!

Ah, The Beach Boys‘ Little Saint Nick. What a great track; despite the surfin’ vibe it still comes across so Christmasey. That links nicely in to Christmasey by Mr Beach Boy himself, Brian Wilson.

If you’ve ever been to Disneyland Paris at Christmas (yeah we know, it’s not actually in Norfolk) you’ll probably here Chanté, C’est Nóel played ad infinitum. And you’ll be singing it forever. It’s catchy, very catchy.

Greg Lake‘s I Believe in Father Christmas carries a degree of poignancy; A tale of lost childhood innocence, one all parents dread. What happens when they stop believing in the big man in the red suit after (maybe) 10 years of white lies to protect the illusion? Do I have to go on a diet now?!

Whilst there are many versions of The Christmas Song, there are two on this play list. We absolutely had to have Nat King Cole‘s version. Oh, here comes a bad Alan ‘Fluff’ Freeman  impersonation here. Walk, don’t run pop pickers, because surfing up next is The Ventures with their version of seasonal sensation, The Christmas Song.

Val Doonican in a festive jumper and crooning on a rocking chair? Morecambe and Wise Christmas special on the telly too? Yep, nostalgia play a big part at Christmas. It comforts us, brings back good memories and makes us feel all warm and fuzzy inside. I reckon that’s why I dig out the Andy Williams Christmas Album early every year. Ladies and gentlemen, I present to you Mr Andy Williams and It’s the Most Wonderful Time of the Year.

Mariah Carey‘s All I Want for Christmas. There’s a dog with antlers in the video. ‘Nuff said! 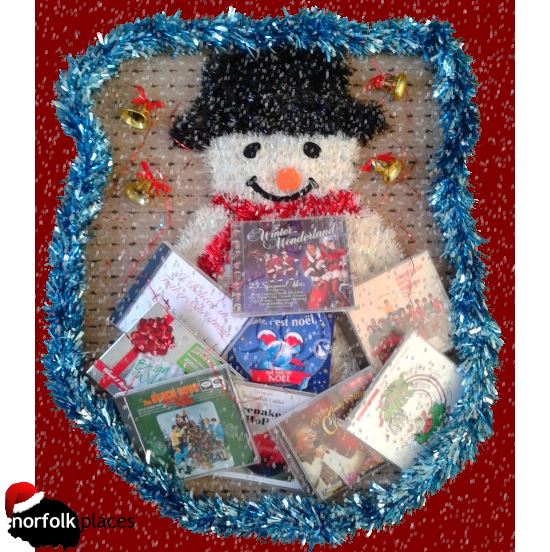 We were pleased to find the video for Spike Jones’ All I Want For Christmas Is My Two Front Teeth as we had never seen it before. It’s a great comedy record, as are many Christmas tunes. That’s why Bo Selecta‘s Proper Chrimbo made the list. Sadly, I couldn’t find the video to Spitting Image‘s Santa Claus Is On The Dole, but it had to be in our festive playlist because, well, just because really. Ok, it was one of the first records I bought as a kid and it still makes me chuckle (2020 note – sadly, many seasonal Father Christmas/Santas will be out of work, so there this adds a sobering relevance to this tune – without any political manifestations this time round).

Shakin’ Stevens: Merry Christmas Everyone. What’s not to love about the videos to this Shaky Christmas tune? Snow is falling, there’s a sleigh ride, he goes to see Father Christmas, there are some Elves, Reindeer…..

Lowestoft’s own The Darkness and their Don’t Let the Bells End. Double-Entendré anyone?

I have a relative born on Christmas day. The track, I Was Born On Christmas Day always reminds me of her, and it highlights what a great pop act Saint Etienne were. Let’s not forget The Charlatan himself, Tim Burgess. A modern classic.

Okay, you’re probably thinking who are Shonen Knife? Well, as you may gather from the video they’re a quirky Japanese band, and their song Sweet Christmas is just that. Sweet! We’ve also included another track of theirs, Space Christmas, too! I would say we’re helping you discover new music but they’ve been around for a while! While we’re in the mood for some alternative takes, the playlist now includes The Fountains of Wayne‘s bonker but brilliant I Want An Alien for Christmas, and The Smashing Pumpkins‘ Christmastime. Brooklyn’s finest, They Might Be Giants, also make out compilation list too, with their track, Santa’s Beard. FYI, it’s not a cover of The Beach Boys track of the same name – and you can compare these track back to back because they’re both on our list!

The Pixies have been a staple of my vinyl collection dating back to 1988, but they never recorded a Christmas song (though Pixies frontman, Black Francis recorded an album called Christmass under his later-ego Frank Black). However, we have added The Pixies tune, Winterlong in the list because it has winter season overtones, and it fits nicely with our cosy log-fire sing-along.

Most modern Christmas CDs will include Mel Smith and Kim Wilde‘s version of Rockin’ Around the Christmas Tree, but we have to go with the original by Brenda Lee.

Bringing a different meaning to Christmas rapping (sorry), Run-DMC and Derek B drop some festive rhythmic beats, with Christmas In Hollis and Chillin With Santa respectively.

Blue Christmas was Elvis‘ favourite song, and it’s one of ours too. We just had to go with a Vegas period video!

You gotta love Chris Rea‘s gravelly voice. The Middlesbrough-born singers Driving Home for Christmas is low tempo, but jolly nonetheless. We chose the more recent video as it was released in aid of Shelter charity.

Glam-rock Christmas? Slade, Mud, Wizard. Done. Actually, when I originally put this list together only one track Mud’s Lonely This Christmas made the list. Not because I didn’t love the glam-rock festive classics. I do. They are my childhood, and every festive party I’ve attended all rolled up in 3 minutes of jangling guitars. From October to the end of the yea, they are ubiquitous. They are Christmas. But we needed a break from them for a couple of years, and now they’re back on the list.

Kelly Clarkson‘s 2013 tune, Underneath the Tree, is an absolute belter of a tune. Some say it’s comparable with Mariah’s All I Want For Christmas; We agree.

As we reach the end, there is only one possible song to sign off with, and only only version of White Christmas that can must included. It has to be Bing Crosby.

But we’ll step back briefly and poignantly to a couple of other tracks unmentioned so far. As anti-war songs go, Jona Lewie‘s Stop the Cavalry is up there with the best. It was a close call between this and Paul McCartney‘s Pipes of Peace for our festive list. Yeah, we couldn’t really decide so we included both. With their depiction of war it’s amazing how such songs have become firm favourites over the years, but it’s their message of hope and love that wins through. And that’s it really – in these turbulent times, two simple single syllable words. Hope. Love.

Enjoy the holidays and stay safe.