Norfolk man overcoming cancer urges everyone to get into gear and help beat the disease.

A FORMER train driver from near Norwich says it is down to research he has been able to come through kidney and bladder cancer to cycle 300 miles in a month for Cancer Research UK.

Dave Tyson, 57, is now urging others to sign up for the wheelie good cause’s Cycle 300 challenge. Participants will raise money for life-saving research by getting sponsored to pedal 300 miles during June.

Taking part need not be an uphill struggle as people can choose how, when and where they hit the target, whether they ride 10 miles a day, 75 miles a weekend or do it all in one go.

The fundraiser can be completed indoors or outdoors, solo or as part of a team, and cycling to work, the shops or doing a spin class all count towards the distance.

Father-of-one Dave spent 41 years in the railway industry, the majority of those driving trains across East Anglia. He started cycling to work during the latter years of his career and has continued riding in retirement.

He said: “I really enjoy the freedom. If it’s a nice day I’ll just go – it’s not an activity you have to plan for in advance. It’s a really good way of keeping fit and seeing some of the countryside.

“I thoroughly enjoyed Cycle 300, a challenge that made cycling a worthwhile and positive contribution to a very good organisation that’s doing a lot of important work.”

Dave found out there had been cancer in his left kidney three-and-a-half years ago. The first sign something was up came when his urine turned brown whilst on holiday in Mallorca. He visited his GP upon returning home and subsequent tests showed Dave’s kidney was deformed. Work to repair the organ failed, so it was removed, at which point doctors discovered the kidney had been affected by cancer.

It was thought there was a 50-50 chance the cancer would have spread to Dave’s bladder and that turned out to be the case. However, while he still needs regular check-ups, the treatment Dave has had so far appears to have worked. 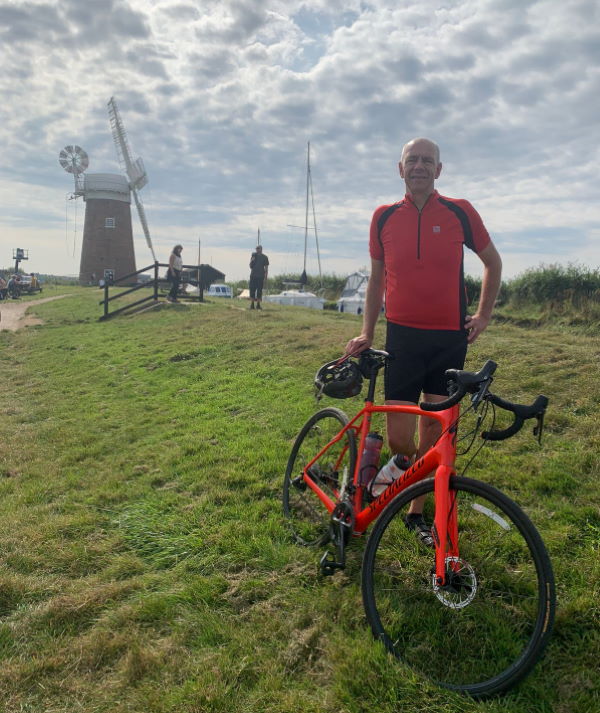 He says he now feels “as fit and healthy as I’ve done for the last 20 years”, and is keen to express how the pedal power of people across Norfolk could help to advance cancer research and ensure more people like him survive.

“I know it’s a cliché, but you really don’t expect cancer to affect you. It’s because of research I’ve had relatively minor treatment that’s helped me to survive, move on and live a normal life, including taking part in Cycle 300. It’s worth taking part even if you only raise a small amount as everybody’s fundraising adds up to a massive and really important amount.”

Dave, whose mum sadly died from lung cancer and dad had skin cancer during his lifetime, managed to raise almost £2,000 when he took part.

In the East of England around 37,300 people are diagnosed with cancer every year*. Thanks to research, though, more people than ever across the UK are surviving for 10 years or more.

As Cancer Research UK celebrates its 20th anniversary, it is paying tribute to its supporters for the part they have played in this progress.

Michael Jarvis, the charity’s spokesperson for the region, said: “One in two of us will get cancer in our lifetime,** but all of us can play a part to help beat it. For the past 20 years, the incredible generosity and commitment of people like Dave has helped Cancer Research UK make discoveries that have saved countless lives and benefited millions of people around the world. But we have so much more to do.

“That’s why we hope Dave’s story can spark a chain reaction across Norfolk that will help us keep investing in science today to deliver the treatments of tomorrow. By signing up to Cycle 300 this June, commuters, weekend enthusiasts and gym bunnies alike can help the charity’s scientists go the distance and unlock new and better ways to beat the disease. We’ve come so far and we’ll go much further. Together, we will beat cancer.”

Cancer Research UK spent over £55 million in the East of England last year on some of the UK’s leading scientific and clinical research. Money raised by Cycle 300 is crucial to the pioneering work of doctors, nurses and scientists who are tackling cancer on all fronts.

Taking on the challenge has positive health benefits, too. Along with helping to build fitness and burn excess calories, cycling regularly encourages a healthier heart and can help to improve mood and sleep.

Join the challenge and receive a free fundraising pack at cruk.org/cycle300