Lord Owen is best known for his time as a frontline politician, when he was foreign secretary and a co-founder of the Social Democratic Party. But before politics, David Owen worked as a doctor specialising in psychiatry and neurology, and his latest book touches on this interest.

Hubris: The Road to Donald Trump, published in late 2018, looks at politicians, and how power, populism and narcissism are bound up with one another. While the title refers to the current United States president, during an appearance at the University of East Anglia’s Autumn 2019 Literary Festival it was suggested that several other well-known politicians also become carried away by hubris.
In a discussion with Professor Lee Marsden, head of the UEA’s School of Politics, Philosophy, Language and Communications Studies, Owen described the former British prime minister Tony Blair and the former US president George W. Bush as “very interesting case studies”.

Owen, now 81, thinks that both men developed “hubris syndrome” (a condition Owen described in an academic paper a decade ago) while in office. It came to Bush, Owen suggests, in the wake of the September 11 attacks, when he developed an ambitious interventionist foreign policy that contrasted with the more modest overseas ambitions he had before coming to power.

With Blair, hubris syndrome emerged after his first general election victory, in 1997, when the new prime minister began to concentrate power within 10 Downing Street, sidelining the cabinet.
“If hubris is acquired under great stress, if you get thrown out of office, or you retire, it should change or could change. With Bush it really has done,” said Owen. 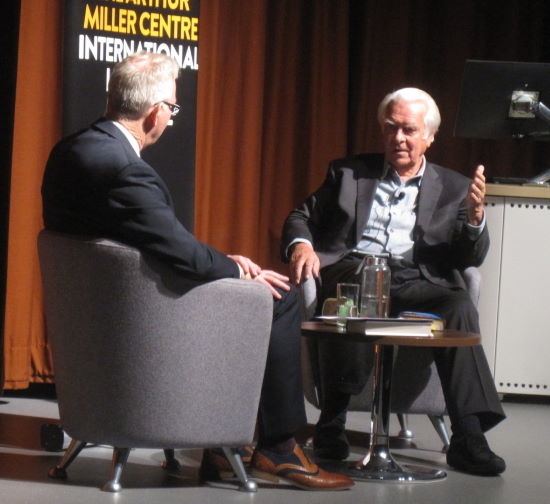 So, today, Bush turns down invitations to appear on television and lives, said Owen, a relatively quiet life. In Bush’s autobiography, Owen noted, the former president admitted to having made mistakes.
Owen sees Blair, by contrast, as not having lost his hubris syndrome, evidenced by his highly paid work across the globe as a consultant to various governments, some of them less than savoury.

With Trump, Owen is interested in whether his hubris was acquired in office – as seems to have been the case with Bush and Blair – or whether it was always there. While reading an extract from his book, Owen suggested that the evidence pointed to Trump’s hubris as having existed long before he entered the White House. But Owen suggested that people who have tried to diagnose Trump with narcissistic personality disorder, a condition characterised by excessive self-regard, a lack of empathy and a need for admiration, were wrong.

Those with the condition are often unable to function properly as social animals, while Owen cited expert opinion indicating that Trump did not have personality traits that were “debilitating”, so he does not fulfil the criteria for the condition, even if he is heavily narcissistic. For all that Trump strikes many as not having the right character to be president, Owen said that it was “not that unusual” for extreme personalities to end up in the White House.

He cited Andrew Jackson, the president from 1829 to 1837, who once killed another man “in cold blood” during a duel, taking aim at his victim’s chest after first being wounded.
Instead, Owen said that the concern with Trump, someone whom he described as being much cleverer than many imagine him to be, was that he was suffering from age-related mental deterioration. This is a subject that has already sparked concern in the media.

“We may be seeing, particularly in the last year, [that] he’s ageing visibly in front of us. We shouldn’t be surprised by this,” said Owen, going on to say that this was “another good reason why he shouldn’t get a second term”.

For all that Britain’s politics, like those of the United States, are in a time of particular turmoil, Owen resisted the suggestion that the United Kingdom was following America’s lead when it came to political leaders.

“I don’t think Boris Johnson is anywhere near Trump. But I don’t know him terribly well,” he said.

“He isn’t a joke; he’s clever. He’s alright to be prime minster.”