The novelist Elizabeth Day says she often works what themes she has been exploring in her work only after she has finished the writing.

But she has found that there are subjects that tend to recur, including what contributes to mental illness and how a person can live with the condition.

“Quite often I realise I have written about difficult upbringings or hard experiences in the past that someone has had to deal with or come to terms with in their own way,” she said.

Day was recently the guest at the fourth UEA Live event (the successor to the UEA Literary Festival) of the Autumn series, where she was in conversation with Christie Watson, the novelist, UEA professor and former nurse.
The British class system is something else that fascinates Day, who was largely raised outside it, having grown up in Northern Ireland (although, she noted, she does not have the accent).

“Whilst observing the British class system at work, what interests me is we’re meant to be post class,” she said.

“It’s so insidious. It’s as much about the gaps as what’s said in conversation. For a novelist that’s riveting.”

Being an outsider is another common theme, said Day, who described herself as “always being compelled by characters who are multifaceted”. Characters, especially women, should, she told Watson, “be given the space to be lots of different things”. 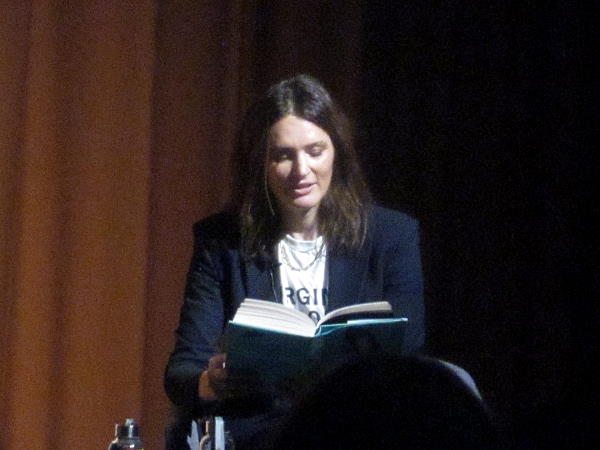 Day, who also works as a journalist, writes non-fiction, hosts an award-winning podcast (How to Fail with Elizabeth Day) and presents programmes on Sky Arts and Radio 4, was destined to be a writer.

“If I had to do one thing on a desert island, it would be writing books. I feel most myself when I’m in the flow writing books. Writing fiction is my first love and it’s a vocational love. I cannot imagine I will ever not do it.”

As a child she was a fan of Agatha Christie’s and describes the billion-selling whodunnit author as “an incredible plotter”.

American novelists were a later interest, although she found that her attempts to mimic the style of some of her idols when she began writing a novel of her own were the wrong approach.

“That was absurd because I’m not like them; I don’t have their experiences,” she said.

She discovered that there was a difference between loving these novelists and believing that she should be writing like them. The key to great writing, she said, was authenticity.

While describing herself as “a character-driven novelist”, Day took a different approach with her latest book, Magpie.

“I came to it knowing the theme and knowing the twist, but that’s all I knew,” she said. “I plotted as I went. I made it easier for myself by having a cast of three characters who were all in one house.”

Those three are Marisa and her husband, Jake (the couple are trying for a baby), and Kate, who moves in as a lodger. Kate sparks concerns in Marisa about, among other things, her relationship with Jake.
As well as writing novels, Day “adores” radio presenting and podcast hosting, the latter of which she enjoys because she is “curious about people”.

“I ask people to tell me about three times they’ve failed in their life,” she said. “They come to the recording knowing what the parameters are and feeling safe within that. That’s a real honour and a really extraordinary insight into the human condition.”

She has pursued similar themes in her non-fiction books, including “Failosophy: A Handbook For When Things Go Wrong”.

“I realised there were recurrent failure principles,” she said. “I felt I could put together a modern philosophy for how to deal with things in your own life.”

If those things in your own life include an ambition to become a writer, Day offered a clear piece of advice: “Don’t be put off.”

“There are so many naysayers who will constantly put you off,” she said. “If you have the talent and the application, the creative industries are still meritocratic.”

Find things to do or somewhere to stay in South Norfolk.