Bereaved dad Ian Doe is preparing for an epic 400-mile bike ride to raise funds for the children’s hospice that cared for “brave, strong and positive” son Callum.

The 51-year-old, from Diss, is taking on a gruelling four-day ‘West to East’ journey from St Davids, in Wales, to Ness Point, in Lowestoft.

He is raising funds for East Anglia’s Children’s Hospices (EACH), which cared for Callum after he was diagnosed with an aggressive grade four brain tumour on Christmas Eve 2018. He was just 13.

He had an operation to remove as much of it as safely possible, in addition to two rounds of radiotherapy.

However, devastatingly, Callum died at The Nook, EACH’s hospice in Framingham Earl, in August 2020.

Ian and wife Michelle continue to receive bereavement counselling and now he is preparing for a monster bike ride – as a way of saying thank you but also to remember Callum.

“It’s going to be a huge challenge but I’m excited and looking forward to it,” he said.

“It’ll be nice seeing different parts of the country and meeting the new people I’ll be cycling alongside.

“I’ll be part of a small group from Dunx Cycles, in Lowestoft, who have organised the event. It’s a fully supported ride and hopefully there will be lots of time to chat.

“However, I’ve never done anything on this scale before.

“It’s good having something to focus on and I’ve always wanted to do something special for EACH.

“Hopefully the money I raise helps make a difference.

“It’s a way of saying thank you for the care and support we received, as a family.

“EACH was with us every step of the way and they’re still supporting us now.

“Michelle and myself have fortnightly bereavement counselling sessions and we know help is always there, as and when we need it.” 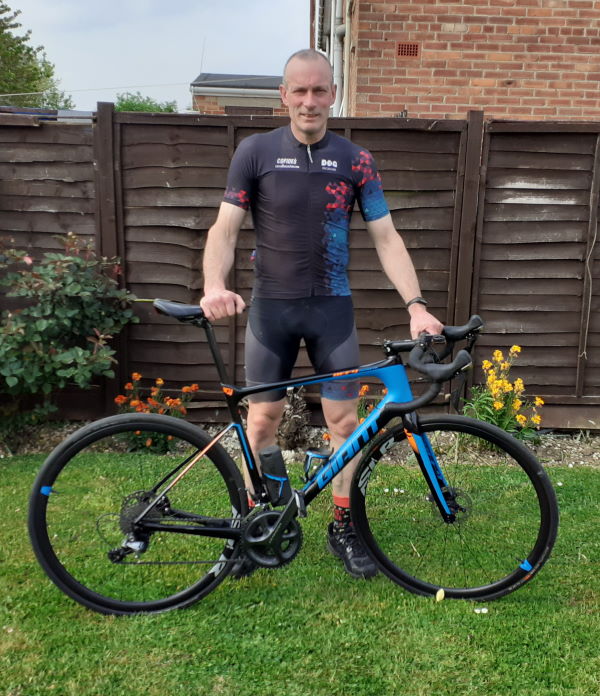 Ian’s journey begins in St Davids, in Pembrokeshire, on 24th May.

The group will then ride across the country, largely staying off the beaten track, with overnight stops scheduled in the Carmarthenshire town of Llandovery, Evesham, in Worcestershire, and St Neots, in Cambridgeshire.

The journey is just over 400 miles and they will arrive in Lowestoft on 28th May.

It promises to be a huge physical challenge but also an emotional one for Ian, given his connection to the cause he is supporting.

“EACH did so much for Callum, from the moment he was diagnosed and we visited Quidenham (the charity’s former Norfolk hospice), after being referred from Addenbrooke’s Hospital,” he said.

“They gave him so many fun, special moments, from having the chance to paint pottery to taking part in a treasure hunt, play the drums during music therapy, attend events and meet Norwich City footballers during a Christmas visit.

“Callum amazed us all with his bravery, strength and positive attitude and he loved being at the hospice.

“The last few weeks of his life were mainly spent there and we’ll never be able to thank the staff enough for the exemplary care and compassion they showed Michelle and myself, as well as our daughter, Abi, 19.

“Callum felt safe there and the team gave him a level of care we couldn’t manage at home.

“EACH was and still is our first port of call. The care team and counsellors have become a big part of our lives and they still can’t do enough for us.

“I remember once asking someone for some washing-up liquid and a dishcloth, after having a meal at The Nook.

“I was told off and in no uncertain terms – albeit in the nicest possible way – to send our dirty plates and cutlery back to the kitchen!

“As a family, we stayed at the hospice on two occasions – firstly for a week and then for a fortnight, until Callum died.

“Michelle and I would go for little walks around the grounds and when we got back the fridge in our room was stocked with food and drink.

“On another occasion I remember being in our room with Callum.

“One of the nurses came along and asked if he’d like to go with her and bake some cakes. It was little moments like that that made such a difference.

“The EACH team are amazing people and they quickly felt like friends of the family. They were so helpful, friendly and personable and it came completely naturally.

“You can’t fake kindness like that. Yes, it’s their job but they gave us much more than that.

“They really looked after us, as a family, and it takes a special kind of person, with a big heart and certain inner strength, to do what they do. We’re eternally grateful.”

Michelle previously took on a special fundraising challenge of her own, raising £2,119 after jogging and walking a virtual 874 miles from Land’s End to John O’ Groats.

The 48-year-old was invited back to The Nook in October to meet visiting North Norfolk MP Duncan Baker.

To read more about Callum’s story, go to each.org.uk/story/callums-story