The tale of Cinderella is well known: a pretty but put-upon girl lives in the shadow of her two bullying ugly sisters but, eventually, meets her prince.

This production at the Theatre Royal in Norwich kept faithful to the story, and did so with style thanks to a varied set of songs, well-acted main characters, plenty of dancing, occasional slapstick humour and even some pyrotechnics.

Starting with an excerpt of Relight My Fire, the show moved through the likes of It’s a Beautiful Day, Somebody to Love and Rewrite the Stars, with the romantic atmosphere of this last song punctured occasionally by a dodgem car driving across the front of the stage. 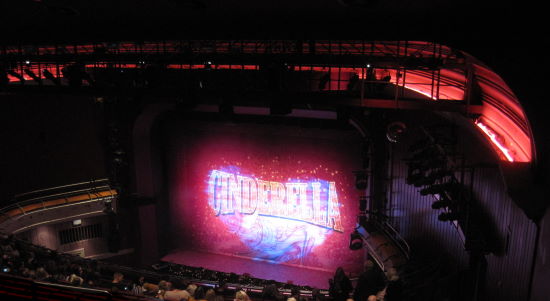 The former EastEnders actor David Witts was in fine form as the Prince, while Kara-Lianne Jones, playing Cinderella, showcased a voice of great purity. The pantomime dame, Richard Gauntlett, was an audience favourite as the Fairy Godmother, as was Joe Tracini, who was always full of energy playing Buttons.

Amanda Henderson, an ex-Hollyoaks actress, played one of the Ugly Sisters, Alexa, in a delightfully over-the-top manner, and she even referenced her recent meme-creating appearance on television’s Mastermind. Alix Dunmore was just as much fun playing the other Ugly Sister, Siri.

The excellent David Gant, as the long-suffering Baron Hardup, certainly had the audience’s sympathy when he finally lost patience with his grasping, lazy daughters. Supporting the main cast was an energetic and skilled team of male and female dancers, plus a group of young children, who were especially popular with the audience. The scene changes were many and extremely varied. In the second half, for example, one moment the stage resembled a mysterious Venetian ball and then in the next it had been transformed into a 1980s-style gym as the dancers moved to the tune of “Let’s Get Physical”.

Naturally enough, Cinderella did get her Prince in the end, and the upbeat finish was accompanied by a medley of high-energy hits from Take That, among them Back for Good, It Only Takes a Minute, Relight My Fire and Let it Shine, songs that got some of the adult women in the audience moving.

Great songs, plenty of jokes, larger-than-life characters, marvellous costumes and a happy ending – Cinderella at the Theatre Royal delivered everything you would hope for from a first-rate pantomime.

Cinderella was on at the Theatre Royal, Norwich, from Tuesday, 17th December 2019 until Sunday, 19th January 2020.