Linda, the main character of Joanna Cannon’s new novel, A Tidy Ending, is someone who realises that she is missing out in life.

Living on a housing estate in the Midlands and unsure if she loves her husband, she has few few friends and is bored.

Then post begin arriving for the woman who used to live in Linda’s house – and these arrivals by mail give a glimpse of a much more exciting existence.

“Linda sits and looks at these catalogues and decides, ‘That should’ve been me.’ She goes out and claims that life,” Cannon said at the most recent UEA Live event (formerly the UEA Literary Festival).

When women start going missing in the area where Linda lives, and her husband begins to keep odd hours, Linda is “far too busy trying to be the person she should’ve been to worry about it”.

Linda began life in a short story, but the character stayed with the author, who began coming up with new characteristics for her until she ended up as the subject of a novel, Cannon’s third. 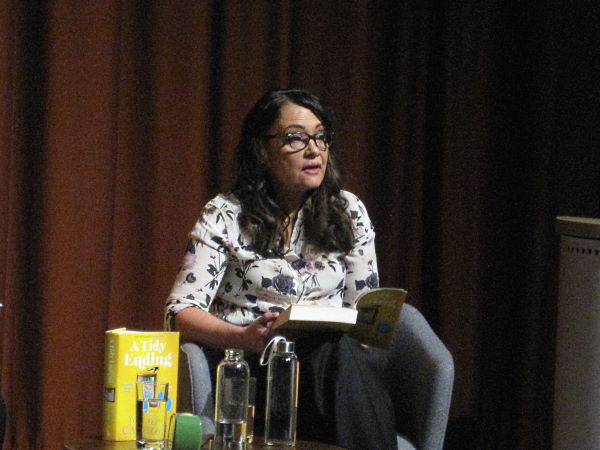 Cannon, who used to work as a psychiatrist, said she often came across patients whose descent into depression began by viewing the exciting – albeit heavily curated – lives of others on Facebook. They compared themselves to these others and felt inadequate.

“For some people that continued down a very dark road,” Cannon said. “That’s what happened with Linda … Julie Cohen [the novelist] said you should be able to summarise your book in one word. My one word for this book is envy.”

Cannon described Linda as being on the edge of being normal, and said all of the books she has written have looked at “the idea of being misjudged”.

“Being a goat in a world of sheep is an awful thing,” she said. “Working in psychiatry I met a lot of people who were goats. I wanted to explore what that was like.”

Insightful and interesting in her discussion but pleasantly down to earth, Cannon explained that when she writes a novel, she knows how it will end, but otherwise does little planning. It is quite unlike, she said, producing a police procedural, where key details have to be worked out in advance.

“I think you can allow the characters to take you there,” she told Holly Ainley, book buyer for the department store Jarrold.

“I don’t quite know the route I’m going to take. That’s how I like to do it. But I have to have an endpoint.”

Remarkably, Cannon said she wrote her first novel, 2016’s The Trouble with Goats and Sheep, while sitting in her car during her lunch breaks.

Cannon explained how writing her second book involved far more pressure than the first. She feared she might be labelled a one trick pony who was unable to go beyond that well-regarded debut.

But when Three Things About Elsie was published in 2018, it too achieved good reviews and sales, and the made Women’s Prize for Fiction’s longlist.

Breaking and Mending, Cannon’s memoir of her time in medicine, came out a year later. Writing this was, she said, “really emotionally draining”.

“It was more like vomiting onto a page,” Cannon said. “I remember writing two chapters that I knew would never go in. I … threw them in the aga. I had to purge myself.”

Cannon said she sees herself as “an observer, a noter of detail” and said that people write so that “we feel less alone”.

“That’s why we write, so there’s something that connects us all,” she said. “I’m just lucky people like what I say.”

– UEA Live continues with Shon Faye on May 4 and Raven Smith on May 11.