We joined a walking party at Holkham Nature Reserve

It is mid-morning at the Holkham National Nature Reserve in north Norfolk and two of the cattle on the freshwater grazing marsh are squaring up to one another. They appear to butt foreheads as they tussle for a minute or two before separating and returning to their favourite activity – eating grass. It provides a moment’s amusement for those of us in one of the hides overlooking the grazing marsh, but we are, of course, not here to observe the antics of the livestock.

Instead, this “Safari On Foot” offers our group of ten the chance to learn about the varied habitats that make up this 9,600-acre nature reserve accompanied by one of the site’s expert guides, Will. 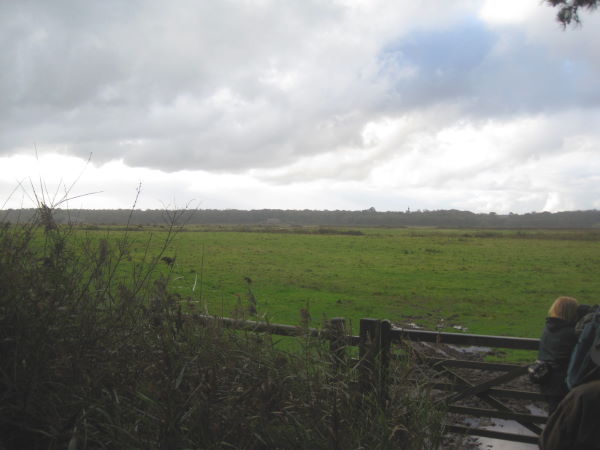 It is surprising to learn that all of the grazing marsh we are looking across is actually reclaimed, having been saltmarsh until reclamation work took place between the 17th and 19th centuries.

Previously drained for arable crops, it is now grazed by some of the more than 500 cattle owned by the Holkham Estate, which the reserve is part of. Being less aggressive eaters than sheep, the cattle leave behind tufts of grass that provide habitats for ground-nesting birds. There is no shortage of birds of all kinds here. Among those we spot as we look out of this south-facing hide is the great white egret. Several years ago this bird acted as a magnet for twitchers, but it is now established as a breeding species at the reserve and numbers are increasing in the UK as a result of climate change. 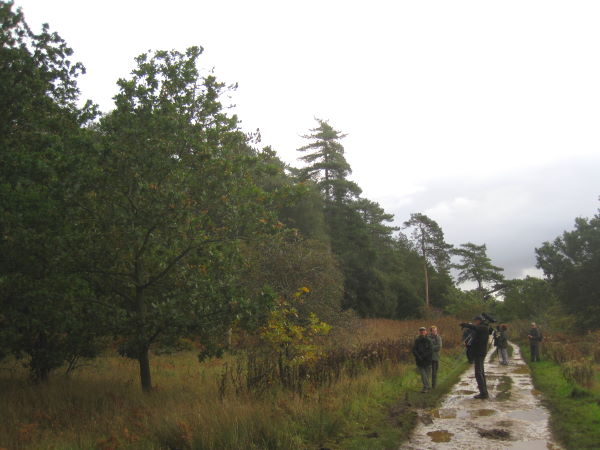 The cattle egret, which is also becoming more common, appears to be absent today, but thanks to Will’s extraordinary ability to spot and identify far-off birds in an instant, we do see some pink footed geese passing by in the distance.

Walking west along a path from the car park at Lady Anne’s Drive we see myriad birds, including tiny goldcrests (they are jointly Britain’s smallest bird) that have arrived from Scandinavia and are abundant during our day-long safari. We also identify jays, little grebes and goldfinches.

And there is much more than the birds to enjoy. Autumn is, of course, a great time for fungi, such as the false deathcap, which, as its name suggests, looks like a deadly mushroom but is in fact harmless. Having a white cap with light brown patches, it makes for a particularly fine sight after opening out. Very different to look at but equally impressive are the orange clusters of hare’s ear fungus. 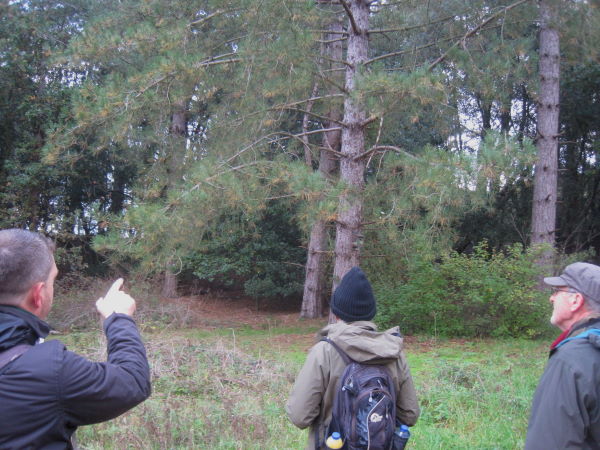 As we walk along the path, Will explains that the pine woods to our right date back to the middle of the 19th century. There are Corsican pines, which have grey bark and grow well in eastern England because of the lower summer rainfall and higher summer temperatures, and Scots pines, which have redder trunks.

On our visit contractors are thinning out some of the pines, which should allow light to penetrate, helping to create a more diverse range of species at ground level. This year’s harvesting is some of the first since planting of the trees began more than 150 years ago.

After a packed lunch provided as part of our Safari on Foot we continue towards Burnham Overy Staithe, which the nature reserve extends beyond. 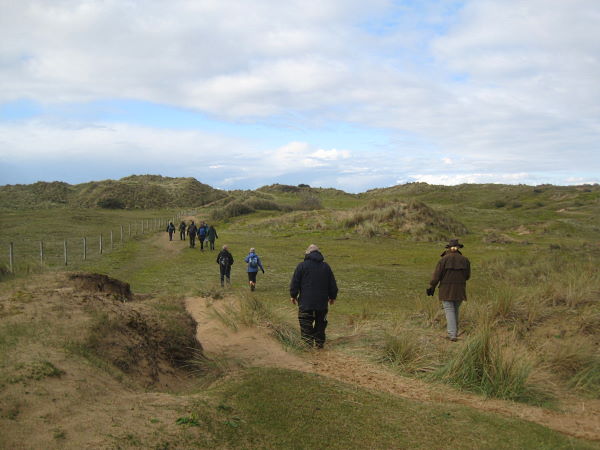 Among the dunes there are large bundles of reindeer moss, a pale green lichen. Also visible is the string-of-sausage lichen, which is also pale green and tends to be much rarer. As well as having myriad fungi, plants and lichens, the dunes also have scattered rabbit bones, showing that birds of prey have been active. On the edge of the beach, we spot small clumps of sea holly and pass hundreds of razor shells and a few sea urchins, which, like other echinoderms, show five-point symmetry.

Heading back to the dunes leads to an area rich in plant life that, just a few years ago, was golden sand, an indication of how nothing stands still when it comes to colonisation. Taking a well-deserved break here is a fieldfare that has recently flown in from Scandinavia and may still have a flight to southern Europe to come.

Our safari ends with free coffee and cake at the nature reserve’s café – a fine way to end a fascinating day that included sightings of no fewer than 35 types of bird and 10 fungi.
– For more details about the Safari on Foot, visit www.holkham.co.uk/event/safari-on-foot.

FACILITIES – There is a café with toilets that walkers can use at the start and at the end of the day.

DOGS – Because the walk involves trying to spot wildlife, dogs are not permitted.

WHEELCHAIRS – Some parts of the walk would not be suitable for wheelchairs.

CLOBBER – Participants typically wear walking boots or wellies. Weather and the time of year should be considered when deciding if additional protection such as waterproofs is required. At this time of year in particular feet might get wet if walking boots are not waterproof.

DISTANCE – The Safari on Foot usually covers between about five and eight miles.

ANYTHING ELSE – The Safari on Foot begins at 8am, lasts until about 4pm and can be booked on Holkham’s website. A packed lunch, including water, is provided (at the time of writing), although participants might like to bring snacks or a flask of tea or coffee. Walkers should take binoculars to help them see the many birds that will be spotted during the day. There are also plenty of photo opportunities, so taking a camera too is a good idea. Participants should also consider current issues (for example during the Covid19 pandemic you should take a face mask for use in the bird hides and the café) and check Holkham’s website for further information.

Find things to do or somewhere to stay in North Norfolk.