When Bimini Bon Boulash was approached by Penguin Books with the idea of writing a book, the question didn’t have to be asked twice.

“I had this idea of of having a three-month break in the mountains of Thailand where I had this amazing creative mindset,” Bimini said at the second UEA Live event of the Autumn series.

It didn’t quite turn out that way, not least because Bimini has had plenty of other commitments since coming to prominence on the second series of the programme.

These all meant “the writing process was very difficult”, but one that they (Bimini is the stage name of Thomas Hibbitts, who identifies as non-binary) did not want to pass on to a ghostwriter, even though there had been “an opportunity to not write the book”.

“For me it was very important that I wrote the book,” said Bimini of Release the Beast: A Drag Queen’s Guide to Life.

“Everything in this book comes from me. I gave myself deadlines; I met them. It was very difficult and very sporadic, but once I give my mind to something, I have to go full hog. I’m so glad it’s done and I’m very proud of it.” 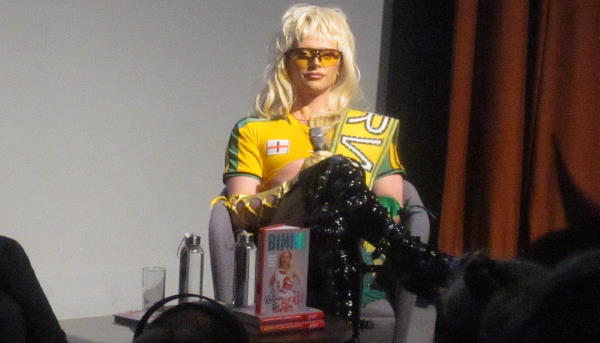 The hope, said Bimini, is that the book could end up on the Sunday Times Bestsellers List, something that would be a first for a drag artist.

Bimini, who was runner-up in the series, is in high demand as a model and has been hired for fashion shows and been featured in plenty of shoots.

“Doing Vogue was just mind blowing to me and getting to wear all of these designer clothes was a dream come true.

“You have to give them back at the end, but sometimes you don’t [have to].”

While finding the fashion industry to be receptive to those who do not conform, Bimini said the industry “has always been pretty gendered, even though androgyny has always been part of fashion”.

Their current fame and hectic schedule offers a stark contrast to what was at times an awkward time growing up in Great Yarmouth.

Being, as Bimini put it, “labelled as a boy” yet doing things that were seen as feminine resulted in ridicule. It is something they now reflect upon. 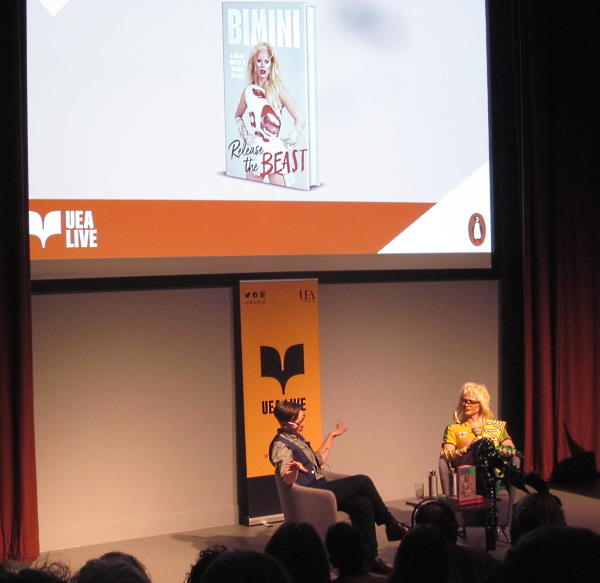 “The idea of binary exists as a systematic way to control who we are,” said Bimini, who was dressed in a yellow-and-green outfit in tribute to Norwich City Football Club.

“It comes down to labour – men should be seen as the breadwinners, and women as the homemakers.

“If you look back through tribes, that hasn’t always been the case. The idea we should fit into a binary is, to me, boring.”

A move to East London helped Bimini to crystallise their thinking around issues of gender. They said their experiences of the nightlife scene gave them “so many ideas about the binary”.

In the words of the event’s host, KR Moorhead, UEA Live co-director and a lecturer in creative writing at the university, Bimini was “the most political” of the drag queens on Drag Race UK. Given where they now live, Bimini said there was little option but to be this way.

“I came up in the East London scene, where it’s so political,” said Bimini. “We have such an array of people performing … For me, drag is political. I’m sitting here because of drag queens and kings and gender nonconforming [people] who started our movement.

“I always talk about stuff that means a lot to me. It’s about being open and learning and never stopping to learn. We’re humans and our nature is to be curious and to learn.”

We recommend buying books from physical local books stores to support the high street and local economy. If you do wish to buy online, especially eBooks, we have links to lots of books by Norfolk writers on Amazon. Buying this way supports NorfolkPlaces. Another way to support NorfolkPlaces would be to buy us a virtual cuppa.

> Go to our fun & games page for more even quizzes and games. We’re still working on this page but there are a few quizzes ready and you can play our fun Dinosaur game!

> Why not browse some of the listings on NorfolkPlaces in Greater Norwich or the North Norfolk area to find places to visit, somewhere to stay, local products, lifestyle services, and events.

> Visit our Love Norfolk blog to read the latest articles on NorfolkPlaces.