With a history that stretches back more than seven decades, the Radio 4 programme “Any Questions?” is nothing less than a national institution.

It is similar in format to BBC1’s “Question Time”, but tends to feel more civilised and less confrontational than its television cousin because, while the audience is allowed to ask questions, they are not invited to comment.

So, although the person who actually asks the question sometimes has a short right of reply, in the main the audience watches, listens and claps, avoiding the rabble that the television programme sometimes descends into.

Broadcast live at 8pm on a Friday evening and repeated on Saturday at lunchtime, the show comes from a different venue each week.

On February 21, 2020, that venue was the Thomas Paine Study Centre at the University of East Anglia. 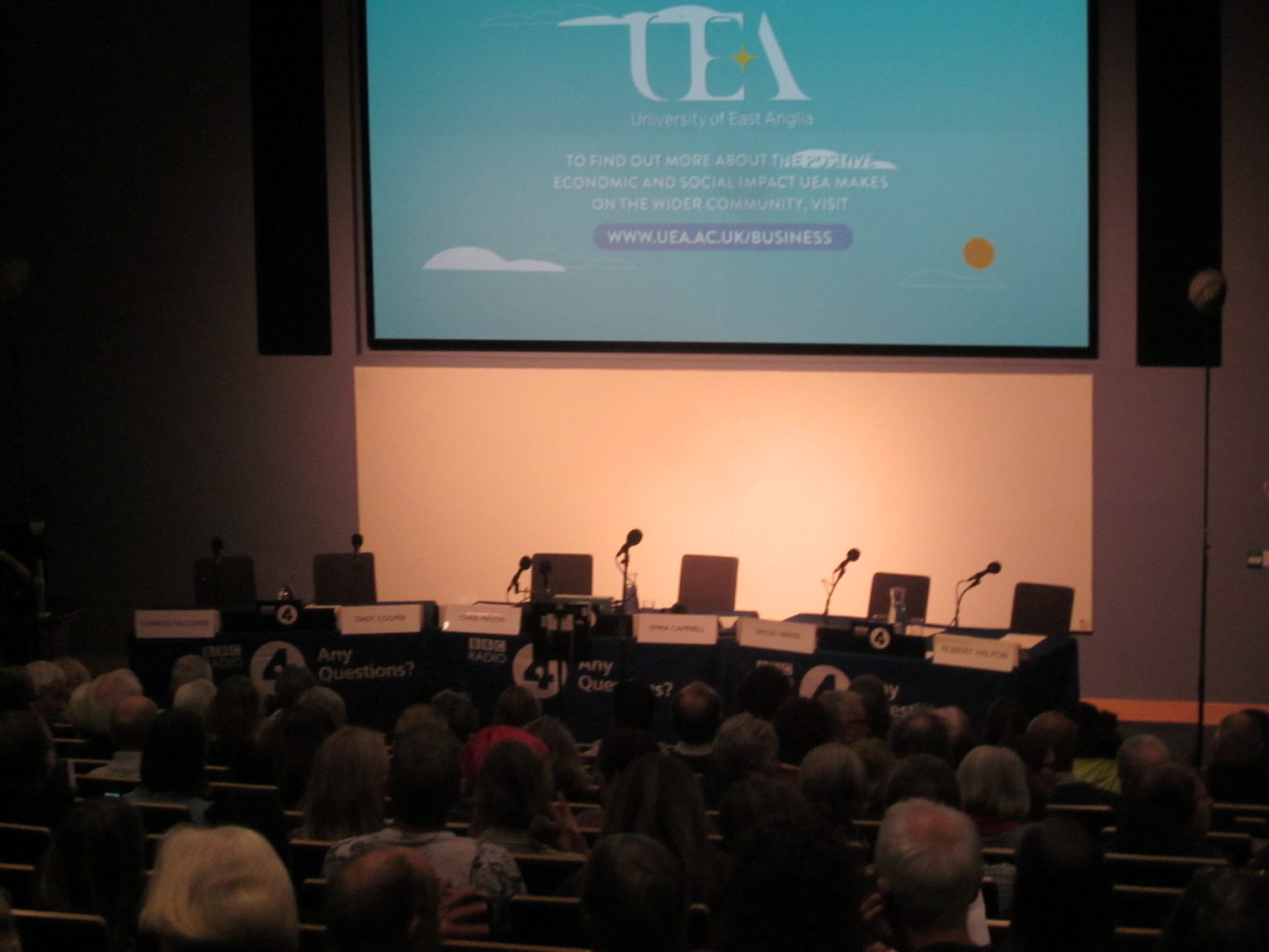 The programme had been invited to the UEA by the Public Media Alliance, a 50-year-old organisation, based at the university, that promotes public media worldwide.

There was a buzz of anticipation in the foyer of the study centre as audience members milled about and on a small shelf on one side of the room, scribbled down suggested questions for the panel before dropping them into a small postbox-like box.

Even well before 7pm, more than an hour before the broadcast was due to begin, the lecture theatre inside the study centre was filling up.

The desks at the front were set up, listing those who were taking part. From left to right they were the former Labour Lord Chancellor Lord (Charles) Falconer, the newly elected Liberal Democrat MP Daisy Cooper, the host Chris Mason, the producer Emma Campbell, the journalist and historian Simon Heffer and the Conservative MP Robert Halfon.

Before they arrived it was the turn of the Public Media Alliance’s chief executive, Sally-Ann Wilson, to give a short talk on the organisation and to describe the value of public media, something that is perhaps particularly pertinent in Britain at the moment. 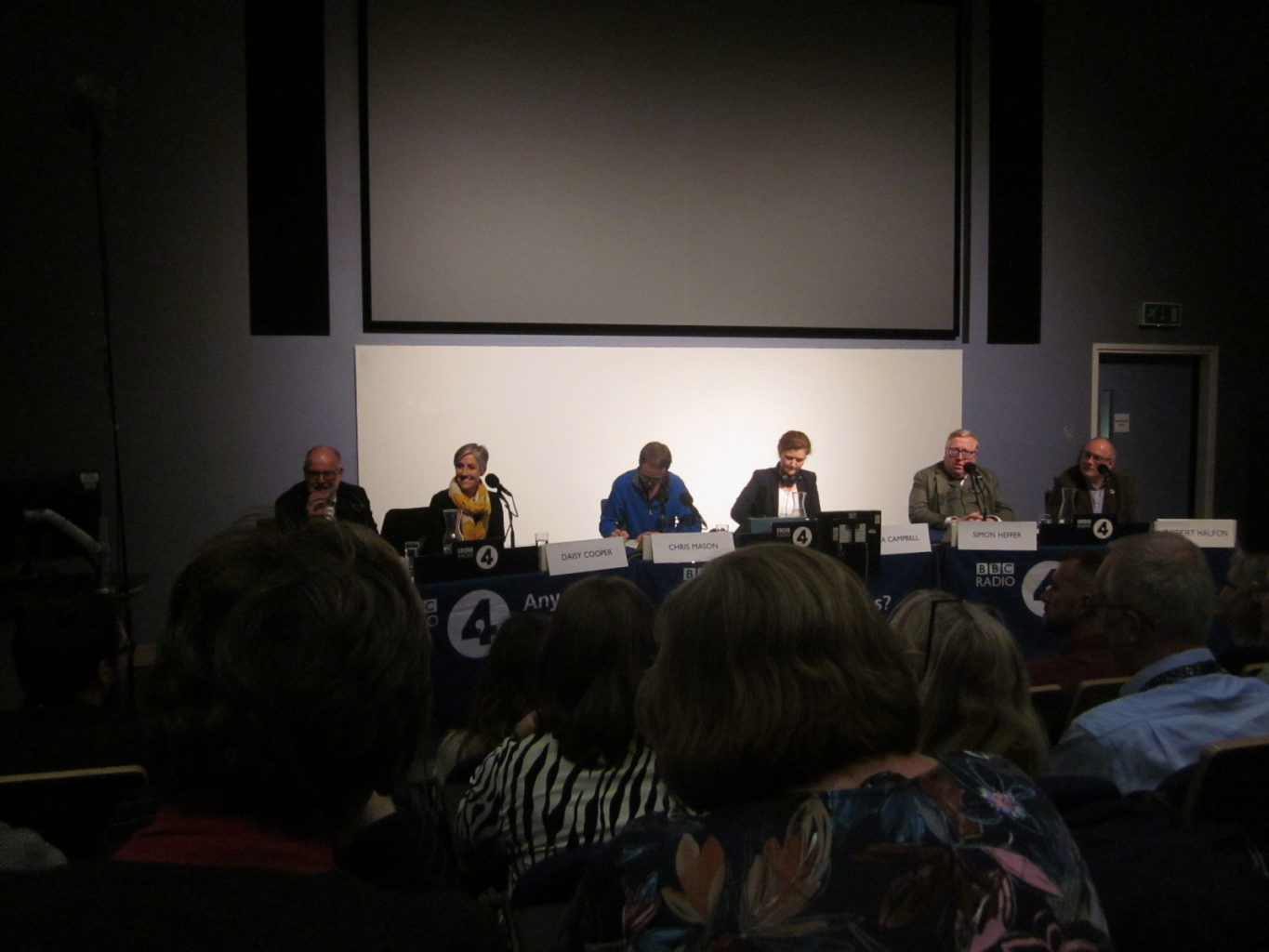 Then, to warm up the audience, the BBC East political correspondent Andrew Sinclair spoke to the audience, getting them to practice clapping, cheering – and even booing.

One audience member complained that there were two right-wingers on the panel (referring to Simon Heffer and Robert Halfon) plus a Labour representative (Lord Falconer) who was on the right of the party.
Sinclair pointed out that the original Labour panel member, a female MP, had been replaced by Falconer at a late stage because she had refused to cross a picket line. Indeed a few hardy picketers were still in place on the entrance road to the university that evening as part of the 14-day strike by university staff over pay, conditions and pensions.

Another audience member objected to Sinclair’s use of the term middle class when he quoted from a report that described the typical Radio 4 listener.

And then the panel, the host and the producer arrived, with Mason, who was dressed down in a zip-up blue fleece and a pair of jeans, offering a stark contrast to Heffer, who was wearing a magnificent three-piece green tweed suit. The veteran journalist looked like he had been plucked straight out of the middle of the 20th century, or earlier.

Campbell said a few words and called out the names of 10 audience members whose questions had been selected. They came and sat on the front row.

Soon after, the 8pm Radio 4 news came through the speakers and, a couple of minutes later, lights at the front went on and the programme began, with the genial Mason welcoming listeners to the birthplace of the postcode, a reference to that fact that postcodes were trialled in Norwich in 1959.

The first question – Should Boris get his wellies on? – set the pattern for all subsequent questions: witty and to the point.

In most cases, the answers were less concise, with Mason giving panel members the space to develop their arguments.

But the sharp-brained host would also occasionally interject to cross-question panellists and ensure that they justified their statements on subjects ranging from the government response to the recent flooding to press regulation.

Campbell, like Mason, had one ear in her headphones and she largely stared straight ahead concentrating, but occasionally she conferred with the host and wrote down a note for him, to which he might respond with a grimace or a thumbs up.

Cheering loudly and occasionally booing and shouting, the audience, meanwhile, were heavily engaged even if they were not doing the talking.

It was no wonder the crowd took a keen interest – watching this programme being made live was a mesmerising experience, far more so than listening to voices on the radio, however interesting they might be.

All too quickly, with just a few of the 10 questions dealt with, Mason said there were just a few minutes remaining before fitting in a quick final question.

Then the 47 minutes were over and the panel and audience got up to file out, with the panellists and host having their photo taken together.

As they left the room, Lord Falconer and Simon Heffer paused to shake hands and have a pleasant chat. Given the generally non-confrontational nature of Any Questions?, it was a fitting way for them to complete their appearance on this consistently interesting show.